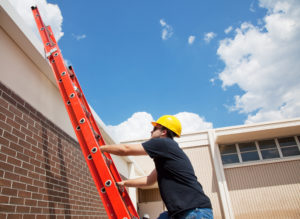 A house builder died after a fall from a ladder. The incident happened when two workers were climbing two ladders positioned side by side. Between them they were carrying a sheet of wood to be used on the exterior gable area of a house under construction. The sheet weighed about 25 pounds and was six by three feet in size.

The two ladders were about four feet apart, resting on an uncompacted section of earth. At the time of the incident, the two workers were on the upper section of the ladders. The co-worker heard the victim say that his ladder felt shaky. Then the ladder slid sideways away from the other ladder. The victim fell about 10 or 12 feet to the shallow ditch. He was taken to the hospital where it was discovered he had irreversible brain damage. He died the next day.

Ladders should be placed on a solid surface, and secured against movement. Workers should not carry heavy, bulky objects while ascending ladders. Instead, these objects should be hoisted up. If these practices had been followed, this fatality might have been averted.