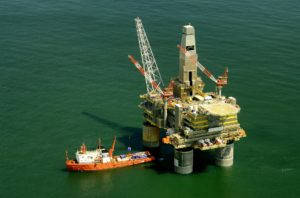 Tell your crew about what happened to these workers. Failing to identify hazards before a job leads to many accidents in the oil and gas industry.

A fatal accident occurred on a drilling rig where a stabbing board, weighing half a ton, fell 45 feet (15 meters) from the derrick, striking a driller who happened to be underneath. Despite prompt medical care the driller died two hours later.

While the crew was running casing, a stabbing board, which allows a derrickman to work at height in the derrick, was in use. The stabbing board is normally raised and lowered on vertical tracks by an electric winch. After about 10 hours of work the electric winch failed.

The company representative was only informed that a small electrical repair was necessary. An electrician was called but he found that the repairs would actually take some time. No permit to work was issued. A temporary alternative was proposed: use a one ton SWL chain block to raise and lower the stabbing board. The chain block used was not appropriately marked with the current lifting equipment color code.

The board was raised and secured in place at high above the rig floor using its upper manual locking bolts. The derrickman attached his safety harness to the board, not to the fall arrestor. After installation it appeared that the chain block had some slack between it and the board. The upper manual locking bolts were withdrawn by force. With their sudden release the board dropped as the slack chain was taken up. The chain broke, apparently due to shock loading. The stabbing board’s lower safety latches failed which would have stopped its descent. Earlier in the shift, the lower track safety stop had not been fitted. As a result, there was nothing to prevent the board from falling. The board struck a driller working on the rig floor causing a fatal head injury. The derrickman fell with the board as his safety harness was attached to it. He suffered serious injuries.