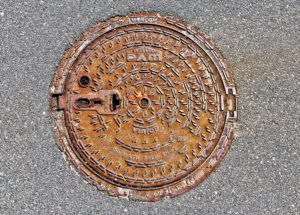 A city engineer collapsed in a manhole while attempting to retrieve a flow meter. The victim, an assistant engineer and a student intern had gone to a landfill to replace a battery of a flow meter that had been placed in a manhole. Once they arrived at the site, the victim opened the manhole cover with a pick-ax. There were four iron rungs mounted into the concrete wall of the manhole to form a ladder. The flow meter was attached to the top rung that was 34 inches (.86 meters) below the manhole opening by spring-loaded handle. The victim used a hook made of a wire hanger to catch a string that was looped and tied around the handle of the flow meter. When he was pulling and lifting the meter, the weight of the flow meter caused the wire hook to straighten and the meter fell to the bottom of the manhole.

The victim quickly descended into the manhole to retrieve the meter. Once at the bottom, the victim picked up and placed the flow meter on the top rung. Just as he was about to climb, he lost consciousness and collapsed in the bottom of the manhole. Emergency workers got him out about 20 minutes later. He was pronounced dead at a hospital.

According to the fire department monitoring data, the oxygen concentration at the bottom of the manhole was low, and flammable vapors were at a high level.