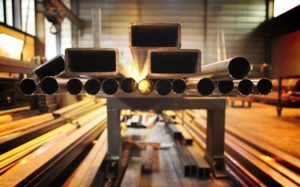 About mid-day a foreman and three carpenters were assisting a crane operator with the placement of a 6000 pound steel mat. The mat was constructed of approximately 80 pieces of reinforcing steel each weighing about 75 pounds.

The mat had to be manually guided into place while suspended from a crane. Three men were standing under the crane boom and load. A fourth was directing the movements with hand signals. As the operator made the final movements to align the mat with another one already in place, the rigging suddenly pulled up on the right side. The mat dropped, dislodging some of the steel bars.

One worker ran north and two, including the foreman, ran south to avoid the falling bars. It appears that the foreman’s hardhat fell off his head as he ran. He was struck in the head by at least one of the falling bars and sustained massive head injuries. He was transported via ambulance to the hospital where he died a short time later.

The investigation did not find any safety infractions with this unfortunate incident although they did make recommendations for a fail-safe way of securing the lift points of similar structures. It was also thought that if the foreman’s hardhat had stayed on his head it may have absorbed enough of the blow that he could have survived the incident.

“Tag” or load lines are used for guiding loads into place. Tag lines allow workers to be far enough away from an overhead load while still being able to control it. Because rebar mats are just wired together, there is always the chance of something breaking loose. Remember: Never crane over workers. Always attach tag lines when craning large or awkward lifts such as rebar mats.