Forklift Driver Struck From Behind 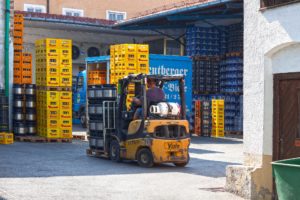 A 20-year-old man, who should have had a lifetime ahead of him, didn’t get to enjoy it. The man had a job with a steel fabricating company and a few months’ experience driving a forklift. On the day of the tragedy, his employer had rented a forklift. The job was nearly done; the employer told the young man to wait while he filled his truck with gasoline. He planned to follow the worker driving the forklift back to the rental agency, using his truck’s emergency flashers to warn traffic.

The young man didn’t wait. He finished the job and began driving the forklift down the highway. It had one flashing light on top and no signs saying it was a slow-moving vehicle. It could travel only 10-15 miles per hour.

After moving to the inside highway lane for a turn, the forklift was struck from behind by a vehicle that had just come over a hill at 60 miles per hour. The driver didn’t have time to react. The victim wasn’t wearing his seatbelt. He was ejected and pinned beneath the forklift for 50 minutes before emergency personnel could free him. He was dead at the scene.

A trailer should have been used to move the forklift rather than having the slow-moving vehicle driven on the highway by the worker. In fact, forklifts should not be driven off work premises and on public highways. The victim’s life might have been saved if he had been wearing a seatbelt.