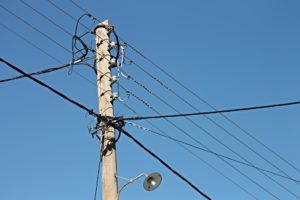 Two mechanics were electrocuted while repairing an earth-moving scraper.

They had been sent to a construction site where a scraper was parked under a 12,000-volt power line. One 40-year-old victim stood on the bottom of the scraper while a truck-mounted crane helped replace the rear differential. From inside the scraper apron, an 18-year-old victim operated a control connected to the crane by cable. The boom touched the power line, which sent current through the machines.

An equipment operator 40 feet (12 meters) away heard the electrical arc and saw the victims on fire. He grabbed a fire extinguisher and ran toward them, but ground currents shocked him unconscious temporarily. The electric company de-energized the overhead lines so paramedics could reach the bodies.

If the company had safety-inspected the site, preventive measures could have been taken, such as: