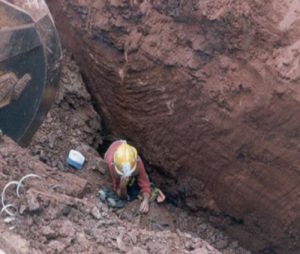 Twenty-three workers have been killed and 12 others injured in trench collapses so far in 2016 – an alarming increase from the previous year. “There is no excuse,” said Dr. David Michaels, OSHA assistant secretary. “These fatalities are completely preventable by complying with OSHA standards that every construction contractor should know.”

Among the victims was a 33-year-old employee, crushed to death this summer as he dug a 12-foot trench for KRW Plumbing LLC of Ohio. An OSHA investigation found that KRW failed to protect its workers from the dangers of trench collapses. The company was issued two willful and two serious violations, with proposed penalties of $274,359.

OSHA’s trenching standards require protective systems on trenches deeper than 5 feet, with soil and other materials kept at least two feet from the edge of trench. OSHA has a national emphasis program on trenching and excavations with the goal of increasing hazard awareness and employer compliance with safety standards. For more information, read the news release.