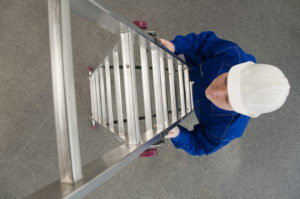 A painter was electrocuted and a co-worker survived a fall after they connected with a high voltage overhead power line.

The two were using an aluminum extension ladder as they cleaned the brick wall of a three-story nursing home. They had finished work on one section and were moving to another location. The painter held the base of the ladder. The co-worker was climbing the 40-foot ladder and at the same time raising the extension.

When the ladder was extended to 35 feet, it tipped backward. It struck a 7,200 volt overhead power line located 15 feet from the building. Because the painter was holding the ladder his body provided a path for the electricity to the ground. He was electrocuted and died instantly. The co-worker got a shock and fell away from the ladder.

Seven per cent of occupational fatalities are electrocutions. A common chain of events leads to electrical accidents. The first is the presence of an electrical hazard, in this case the overhead power line. Next is a faulty or inappropriate condition – using a metal ladder around an electrical hazard. Taking a shortcut is often a factor, in this case trying to move and extend the ladder while it was occupied. Then one last thing went wrong when the ladder tipped and fell into the power line. Remember that conductive ladders must not be used where they can contact electrical conductors. And portable ladders must be tied, blocked or otherwise secured to prevent unintended movement.