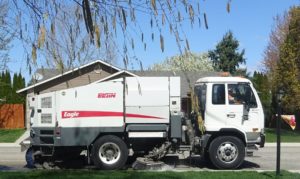 Most victims of heavy machinery collisions are workers, but occasionally passersby are also struck by equipment. For example, a street sweeper moving at about two miles an hour (three kilometers an hour) knocked down an elderly woman on a shopping trip. She was pulled into the machine to her death. The machine was being operated under contract to clean city streets. In a similar fatal incident elsewhere, a pregnant woman was run over and pulled into the machine. Her four-year-old daughter also was knocked down but survived. In yet another city, a nine-year old on a bicycle was killed.

Operators of heavy equipment and persons in the vicinity all need to be aware of one another at all times to avoid tragedies such as these. Heavy machinery is often at work in public areas, constructing and maintaining roads. Motorists, bicyclists and pedestrians must be aware these large slow moving vehicles cannot stop instantly, nor can the driver necessarily see all that is going on around the machine. On the job and on the street, stay away from heavy equipment.