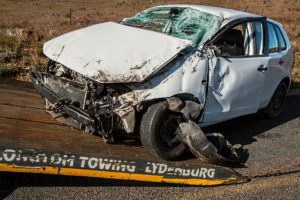 The following is a real-life example of what went wrong and what corrective measures resulted from an incident in the oil and gas industry. It’s taken from the Safety Alerts issued by the International Association of Drilling Contractors and the Canadian Petroleum Safety Council.

WHAT HAPPENED:
A company vehicle left the road and rolled over. Two occupants were ejected from the vehicle. One of them was killed and the other seriously injured. Safety records were reviewed and it was found that approximately three months prior the company had experienced another rollover incident in which an employee was killed after being thrown from a vehicle in which he was a passenger.

WHAT CAUSED IT:
In both accidents, none of the individuals was wearing a seat belt.

CORRECTIVE ACTIONS:
To address this incident, the company did the following:

WHAT HAPPENED:
A rig manager en route home from the rig site encountered a deer and swerved to avoid it. The vehicle struck the deer on the left side and then went into the ditch. When the driver attempted to correct the direction of travel, the vehicle rolled over and the rig manager died as a result.

WHAT CAUSED IT:
This fatality resulted from the employee’s decision to not wear his seat belt, causing him to not only be thrust outside of the vehicle’s “engineered life space” during the rollover, but also to be crushed under the truck.

WHAT HAPPENED:
A driver “fell asleep” at the wheel while returning to camp during the day. He was wearing a seat belt and the injuries were very minor.

WHAT HAPPENED:
A crew was returning from rigging up on a lease and traveling on a very dusty road. Visibility was poor. Their vehicle slammed into a tanker truck that was slowing down to make a turn. Both crewmembers were injured. Attending police stated that if the pair hadn’t been wearing seat belts, they wouldn’t be alive today.